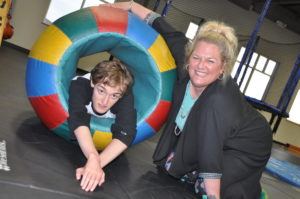 In so many ways, the beginning of this journey with Jakob felt like a one-woman war against time and “the man” who was trying to keep us all down. Of course, that wasn’t the case, but you would have been hard-pressed to convince me otherwise at the time.

The hopeless future that was being presented to me, the obvious frustration and discomfort that Jakob was feeling, my sheer exhaustion from Jakob only sleeping three hours a night was just the beginning. Then there was the incredible amount of information to sift through to find the cause of all the symptoms and the best treatments for them. And then the pushback from mainstream medical when I made choices they didn’t agree with.

No one understood. Nobody got it. No one could relate. Unless they too were going through it.

Back then, I didn’t know anyone else who was experiencing a brand new autism diagnosis. I didn’t have another autism mom to talk to, share ideas with or cry to. I would try to have conversations with my friends, family, and co-workers, but they never went too far. I’d tell them what was going on in my house, and I heard a lot of “it’ll get better,” but that was about it. I really think they thought I was exaggerating or being overly dramatic. Or, maybe I was just making excuses for being late or not getting a project done or not making that phone call or seeming like I really didn’t care about them or my job. They didn’t understand, but how could they?

My pain, my fear, and my guilt were so all-consuming that it was impossible for me to just get through the day without self-medicating with wine, cigarettes, food and other things. I can remember someone saying to me that if I kept it up I was going to kill myself and I said I didn’t care. And I meant it.

And then I found “my people.” Through Jakob’s therapists, I was introduced to other moms like me who were thinking, feeling and believing the same things that I was. I realized I wasn’t quite as crazy as I thought. I no longer felt alone. They got it. They got me. And most importantly, they got Jakob.

I was able to take Jakob to their house and it was OK if he broke a lamp or peed on the wall (neither of which he did, but if he would have it would have been OK). He could tantrum non-stop for two-hours, and they were unfazed and knew exactly what to do to help me. I could be in any mood I wanted – pissed, distraught, exhausted, hopeless and it would be OK.

I don’t think I would have made it through the early years without those ladies, many of whom I still consider my dearest of friends 13-years later. After all our kids have been through, they still get it, they still get me, and they still get Jakob. Acceptance, non-judgmental and unconditional love – the trifecta that has made total strangers connected through a diagnosis, my family.

So if you’re a mom and you feel like you’re fighting a one-woman war, it’s going to be ok.  Your tribe is out there.  Go find your new extended family, share your failures and triumphs with those who get it.  It will get better.  A lot better.  I promise.