Speech and Language Development for Your Child with Autism 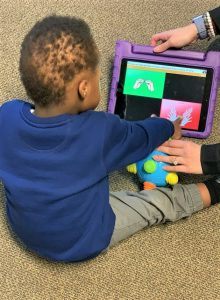 Tip:  Name everything in their world to increase the number of words they know

Using words in the correct order/correct tenses (i.e, “him go to the store”)

-The ability to understand what is said (receptive language)

-The ability to express thoughts through words (expressive language)

Children understand many more words than they can say.

Decreasing the frequency of echolalia – repeating what others say

Limiting the use of scripting – repeating scripts from movies/TV shows

AAC is an umbrella term that encompasses the communication methods used to supplement or replace speech or writing for those with impairments in the production or comprehension of spoken or written language. AAC is often used in situations where individuals are not able to verbally communicate functionally with a variety of listeners.

Rapid Prompting Method (RPM) is a prompting technique used by some parents and educators in an attempt to help their child (often non-verbal or has limited verbal skills) or student with autism or other disabilities to communicate through pointing, typing or writing.

The Picture Exchange Communication System (PECS) allows individuals with little to no communication abilities to communicate using pictures. Individuals using PECS are taught to select and give a picture of a desired item to another person in exchange for that desired item.