All About Acronyms by: Sarah Cicconetti, MA, CCC-SLP

ASAP, YMCA, RSVP.  Acronyms are all around us, permeating our lives and activities. Sometimes we truncate words just for the heck of it, “kay” instead of “okay” or “app” instead of application.  Then there’s the world of healthcare and medicine, and suddenly everything is a jumbled mess of alphabet soup.  It’s hard to keep track of what all the acronyms and abbreviations stand for, so today’s focus is on AAC.  It stands for Augmentative and Alternative Communication.

That’s a lot of words and letters to type; healthcare professions like the quick version “AAC” much better.  As parents, it’s a lot scarier to hear another clump of letters without really understanding what it means.  AAC is basically a way for individuals to get help (augment) or replace (alternative) communicatio 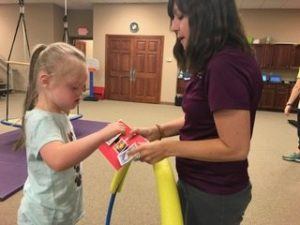 n.  AAC can come in a high tech form or a low tech form.

Low tech AAC is anything that doesn’t get programmed with a digital voice, message, or screen.  There is a low tech form of AAC called Picture Exchange Communication System (sorry, it’s another acronym: PECS), which is all about requesting and then commenting using special pictures.  Other low tech forms of AAC could be a book full of pictures people can point to for requesting or even a book of common people or activities in their day-to-day life.  High tech AAC (think Stephen Hawkings) is about ease of access, comfort of use, and typically is used by communicators with a little more ability to understand the complexity of a more complicated system, although preschoolers to the elderly can use high or low tech AAC.

High tech AAC can be as simple as one giant, clicking button, called a switch.  Some switches have 1 big button, others have a few smaller buttons.  Each button holds a single, recorded message.  When the communicator bumps or hits the switch, the message plays.  AAC can also be as complicated as an IPad application or specialized, portable machine that’s only job is to talk.  These higher tech devices come with programmed software from screen layouts of 4 to 50 full of vocabularies, subjects, word prediction, keyboards, games, search functions, access to the internet for social networking, and the list of possibilities goes on. 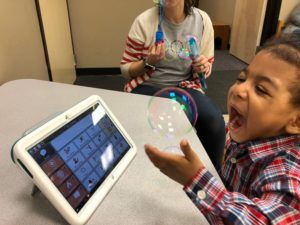 Now that we’ve had a quick background, the initial fear of the unknown should be fading…and all the questions are forming.  The first thing to realize is that AAC can either augment language where it boosts, helps, and lifts a speaker’s verbal communication or it can be an alternative for them, or the third option:  AAC can do both augment and be an alternative.  Simply because a kiddo needs AAC doesn’t mean they don’t need their voice.  Having goals in therapy to address AAC doesn’t mean your child isn’t learning to use their verbal words.  In no way does it mean a child’s verbal and expressive language skills will fade, stop, or never grow.    In fact, the truth is that AAC does the opposite.  It makes verbal language explode.  AAC gives children with a variety of diagnoses, disorders, delays, and deficits the ability to communicate with adults, teachers, and peers who may not have understood them before.  It teaches children to actively seek out communication partners, to make requests, and to share their thoughts and ideas in a way that without the AAC would likely not have happened.  AAC gives children opportunities.  AAC gives children confidence.  AAC gives children power.  AAC gives children models, repetitions, and examples of more words than they would have had access to on their own, and soon, the children have heard the word enough from the AAC, that they can start verbalizing it on their own.  AAC is fully customizable, modifiable, and portable.  It goes where your child goes, can be used as your individual child needs, and there is no limit to the potential for their language.  AAC is kind of like pixie dust…a little sprinkle can transport a child to Never Neverland: a new world of wishes, wonder, and words that they’ve never, never seen before…and you get to go along for the ride.