A Mother’s Experience….Helmet For Head Shape on an Infant By Alyssa Taylor, PT, DPT

I felt nervous, worried, apprehensive, but mostly curious. I was sitting in the orthotist’s office for her to complete a cranial scan on my son. He was 2 months-old and I was slightly overwhelmed. But I knew we were in good hands because Chris, one of the orthotists at Bioworks, is a professional with whom I have worked closely for over 5 years. And, as a pediatric physical therapist at ABC Pediatric Therapy Network, I was excited to be on the other side of this situation. I have referred several patient’s to Bioworks over the year for the same scan, and now it was my turn to experience it. I was excited to see what happened next.

This all started when my son, Knox, was born 2 months before. He and his twin sister were born just over 3 weeks early and spent time in the NICU. He was there for about 4 days. Once we were home, I started noticing he would typically only turn his head to the left. As a PT, I am always monitoring head position for possible torticollis, or neck tightness, especially in my own children. So, I started repositioning him and performing stretches. Despite this, by the time he was one month-old, I began to notice a flat spot on the left side of his head. I mentioned it to his doctor, who agreed but suggested we continue to monitor it. In the meantime, I continued my work with him at home and began checking with my insurance company on coverage for a cervical orthotisis (helmet).

By age 2 months, my son’s flat spot had gotten worse. He was turning his head more both directions, but continued to have an asymmetrical head shape. His pediatrician and I decided to pursue a helmet. We both knew that the earlier a child begins helmet therapy, the faster and better the results are. This is due to the fact that the baby’s head is growing the most in the first 4-6 months of life. Because of this, I wanted to start using a helmet as soon as possible, instead of waiting for him to possibly improve on his own and missing the best window of treatment in the meantime. This is how I found myself in the orthotist’s office a short time later in the unfamiliar position of patient/parent. 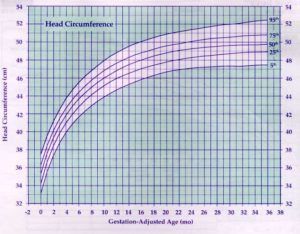 This US Pediatric CDC Growth Chart illustrates the rapid head growth occurring in the first months of life.

The scan indicated a moderate asymmetry (plagiocephaly) and a helmet was recommended. I was happy because I knew we could start treatment early and make great progress. It ended up taking about 2 months to get all the insurance approvals and the helmet made and Knox started wearing his helmet at 4 months-old. Of course, I was concerned about how he would tolerate it, but I shouldn’t have worried. He hardly noticed it at all. He wore the helmet 23 hours a day with removal to bathe him and clean the helmet. He did everything in his helmet, including nursing, rolling over, tummy time… nothing changed or was diminished. The only downside was when he would sometimes get excited and bang his head into my collarbone when I was holding him – ouch! 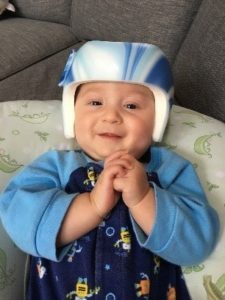 Happy baby in his helmet! He barely even noticed it. he is wearing the Boston Band https://www.bostonoandp.com/products/plagiocephaly/boston-band/

Because of the early intervention, Knox only had to wear his helmet for 2 months. At the time of discharge, he had improved his head shape from a significant asymmetry to only a very slight asymmetry. Now, at age 2, no one could ever tell he had a flat spot at all! I am so happy with the choice I made to pursue a helmet. The minor inconvenience for just 2 short months of his life made such a difference in the long run. I have always recommended to my patients’ families to pursue helmet treatment early if indicated and my own personal experience has solidified this to me.

If you have concerns about your child’s head shape, we can help!  Go to http://www.abcpediatrictherapy.com to answer your developmental questions or for info on how to contact us.