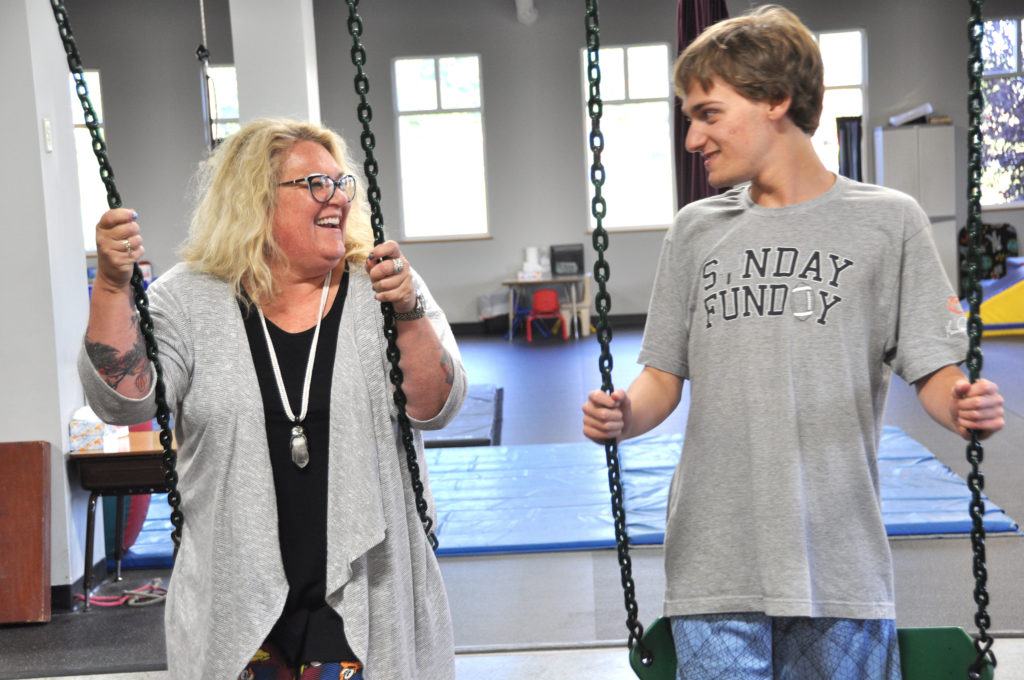 Jakob wore his first Halloween costume when he was six days old. We were having his newborn pictures taken by a professional photographer at the house and I thought it was just so precious. It was this adorable little giraffe outfit and the hood kept falling over his face. I never realized how miserable a six-day-old baby could look. Even when he was that tiny, he hated it. But of course, I wanted the picture so I kept torturing him until we were sure that there would be at least one good shot in the dozens that were taken. The one and only non-miserable-looking baby photo out of the bunch I proudly displayed on a coffee mug.

The next Halloween, I put him in a one-piece lion outfit with a huge mane that, once again, kept falling in his face. He really hated that one. I took him over to a friend’s house and he screamed blood-curdling screams until I took it off him. No pictures were taken; there was no time for that.

The year after that, it was Nemo. I thought that one might be a little better since he just had to step into the middle of Nemo’s body and then the straps over his shoulders would hold up the big Nemo body that would hang around his waist. I think he kept that one on long enough for two pictures. By this time, he was capable of taking the outfits off by himself so all my efforts for anything more were futile. This was also the first year that we tried to get him to actually go trick-or-treating. He never even took a step with the costume on.

It took a while before I realized that I was totally making this all about me and what I wanted. Jakob couldn’t have cared less about going house to house and asking for candy. He didn’t even like candy.  The costumes were uncomfortable. They itched and they smelled funny. It was all just so weird and so unnecessary in his mind. For him, it was like, “what’s the point?”

I had to let go of my expectations. I stopped trying to force the issue. I decided that we didn’t need to do it like everybody else in order for us to enjoy Halloween. And here’s a shocker…that’s when things changed.

When Jakob was seven, he loved Dr. Seuss so my aunt and I got Thing 1 and Thing 2 bodysuits, full-blown fur, headpieces, shoes, and gloves. And just in case, I got Jakob a Cat in the Hat costume.  Once we had our “Things” on, I showed him the Cat in the Hat outfit and he actually wanted it. Without me having to push or manipulate or attempt to force or bribe, he happily put it on and then he stepped outside. For the first time, he took notice of what was going on out there. Kids were all dressed up and walking around the neighborhood, and it must have looked like fun because he wanted in. For the first time, with minimal effort on my part, we took off down the sidewalk and enjoyed Trick-Or-Treating in our own way. We never walked up to any houses or asked anybody for candy and that was ok. We just had our own little 2-person Halloween parade, and it was awesome.

Every year since that Dr. Seuss experience Jakob has enthusiastically chosen his Halloween costume. A red M&M, a pirate, SpongeBob, Harry Potter, Darth Vader, a Minion. Every year we have our parade around the neighborhood and it continues to be just plain awesome. The last few years, he has decided that he likes answering the door, hearing the kids say “trick or treat” and passing out candy. Totally his idea.

Who’s to say what the “right” way or “best” way or “normal” way is to celebrate anything? Who are we to impose our beliefs on what those ways are on anybody?

Jakob knows how he likes to do things. He knows what makes it fun for him. I love his individuality and his creativity. I am so glad that I learned to watch and listen back in the days when he couldn’t articulate what it was he wanted. Because in the end, I learned so much more than just how to get him to wear costumes.